It was all glitz and glam at the 9th edition of Kalasha International Film and TV Awards as Kenya Film Commission awarded winners in the various categories that were up for competition.

This 9th edition also saw winners in the various categories win KES 50,000 as well assorted gift hampers from some of the sponsors – a first of its kind from the Commission, besides the prestigious Kalasha trophy.

The award gala presented a stiff competition in the various categories with emergence of new entrants who bagged the coveted Kalasha trophy upsetting the status quo in the industry.

Making his opening remarks at Kalasha Awards, Mr. Jerome Ochieng – PS Ministry of ICT notes, “We realize that there are challenges we need to work on. For that reason, as a Ministry we’ve come up with a memo that needs Cabinet’s approval to create that incentive for film production and encourage more filmmakers to use Kenya as a preferred film destination.”

Also speaking at the same event, Mr. Timothy Owase – CEO Kenya Film Commission noted that, “We endeavor to take these awards to greater heights. We are glad that through these awards, we have encouraged our local TV stations to effect the 60% rule on local content as per government directive. This has resulted in promotion of local talents and accrued benefits for different stakeholders. We are encouraged by East Africa’s level of innovation and creativity. All we have to do is to believe in ourselves as we seek to compete at international arenas.”

Despite a heavy downpour, the rains experienced on Saturday evening did not dampen the mood of the invited guests who were eager to know the winners of the various categories. 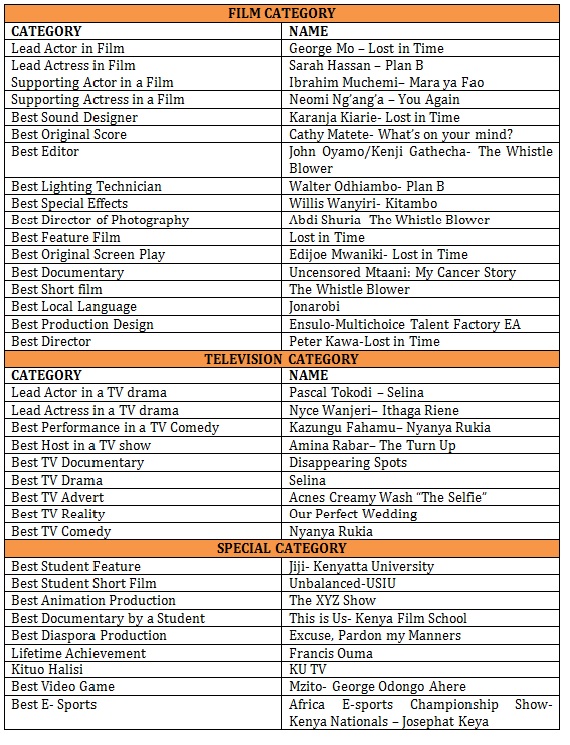 © 2021 Kenya Film Commission. All Rights Reserved.
another one from Ideas Factory