KENYA FILM COMMISSION AWARDS KSH. 3 MILLION PRIZE MONEY TO THE WINNERS OF THE 10TH EDITION OF THE KALASHA INTERNATIONAL FILM AND TV AWARDS.

Kenya Film Commission will award a total of Ksh 3 Million prize money to the winners of the 10th edition of Kalasha International Film and TV Awards. Each category winner will receive Ksh 100,000 prize money in addition to the Kalasha trophy; an increase from the Ksh 50,000 last year.

Kalasha Awards is an annual event that recognizes and celebrates exceptional talent in the film and TV industry in Kenya.

In his speech at the Gala held at Sarit Centre, Westlands, Mr. Joe Mucheru, Cabinet Secretary, Ministry of ICT, Innovation and Youth Affairs said that his Ministry has undertaken a number of progressive initiatives such as the operationalization of the Film Incentive Package that offers relief to film producers who are keen to shoot in Kenyan locations. This is aimed at increasing foreign revenue in the Kenyan economy. He noted that Kenya Film Commission has successfully launched the Film Empowerment Programme – an initiative that offers funding for Kenyan content with the aim of promoting increase in quantity and quality of Kenyan productions. “Through the recent re-introduction of the Drive-In cinemas, the Commission now offers content producers an innovative way of content consumption as well as an alternative distribution system,” the CS noted.

On her part, Ms. Esther Koimett, Principal Secretary, State Department of Broadcasting and Telecommunications in the Ministry of ICT, Innovation and Youth Affairs noted that the Ministry is developing a National Film Policy that will provide a supportive regulatory framework for film business. Additionally, with the Data Network Centre at Konza Techno City nearing completion, filmmakers will have the opportunity to explore VODs and other streaming platforms as alternative distribution channels. “The film industry has a Return on Investment ratio of 1:6 for Government investment, making it an attractive and lucrative sector. I therefore call upon more investors and key stakeholders to venture fully into the film industry,” she added.

Speaking at the same event, Mr. Timothy Owase, CEO, Kenya Film Commission reported that a total of 1036 submissions were received comprising several categories, with 19 categories up for public voting (Public voting constitutes 30% while the Jury vote constitutes 70% of the total vote). The other 11 categories were exclusive to the Jury’s decision due to their technicality. “It is important to emphasize that the quality of the submissions had improved and the use of modern technology was encouraging as we mark a decade of documenting quality African stories,” the CEO added.

The unveiling of the nominees on 18th November 2020 set the stage for public voting which started on Thursday, 19th November 2020 and closed on 3rd December 2020 leading up to the Awards Ceremony on 12th December 2020. For the second year running, the Commission partnered with StarTimes Limited whose mobile App – StarTimes ON – was the official Kalasha Awards platform where the nominated films were uploaded for viewing and voting.

Nakuru’s Empolos Hotel, another Sponsor this year, will award 5 complimentary tickets (Full Board weekend for 2) to the following: Best Host in a TV Show, Best Children Production, Best Performance in a TV Comedy, Best Lead Actor in a TV Drama and Best Lead Actress in a TV Drama.

Daystar University will offer a free entrepreneurship training to the winners (exclusive of Kituo Halisi and Lifetime Achiever) Other partners in the 10th edition were Kenya Broadcasting Corporation who aired the live event on KBC Channel 1 and Communication Authority of Kenya (CAK).

See the Winners below: 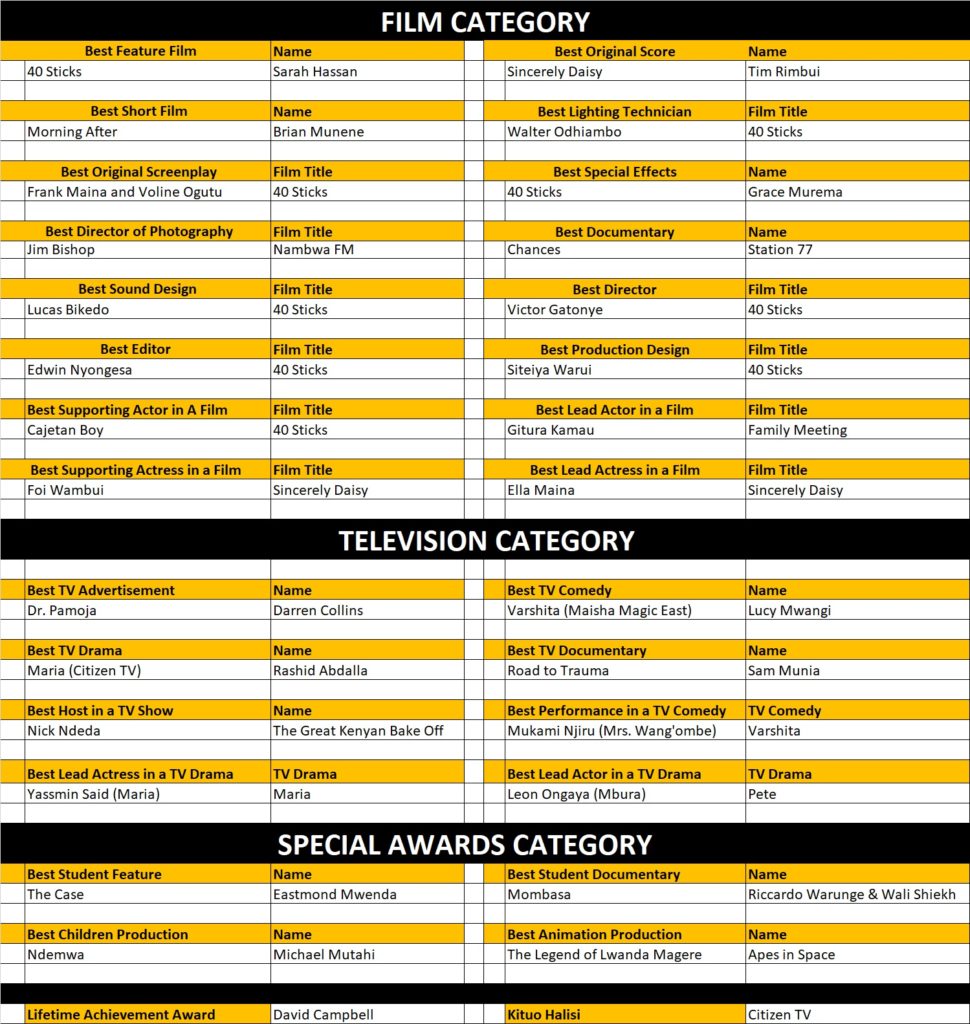