Kenya Film Commission hosted the 4th Edition of Kalasha International Film and TV Market themed “The Future of Content Creation in Africa” which ran from 5th May 2021 to 7th May 2021 at the Sarit Expo Center as a hybrid event in which the audience joined virtually, unlike in previous editions where the Market hosted exhibitions from various organizations within the business of filmmaking. This was due to the COVID-19 containment measures put in place by the Kenyan Government. Kalasha Market offers a unique platform for all regional and international players from the TV and Film industry to discuss, exchange ideas, collaborate, share stories and develop new business opportunities.

This year’s edition highly featured Animation as an upcoming genre in content creation in Kenya and beyond. Animation experts from around the world featured in this year’s conferences and workshops. This included panelists such as Dean Lyon – a world-renowned Visual Effects Creator and Computer Graphics Innovator who worked on blockbusters such as “Lord of the Rings”, “Armageddon” and “AirForce One”; Joann Yarrow who is an Executive Director of Live Animation Studios in the US and Jack Giarraputo, one of the top 25 highest grossing producers in US Box office history, among others.

The Market also focused on opportunities in Gaming and Esports with CEO of Africa’s leading private Esports Organization, Nigerian Sayo Owolabi as one of the panelists. Top South African professionals Jobie Bakama and Kagisho Bapela also joined in the discussions surrounding financial models within the film industry and marketing and distribution of content. The conferences and workshops also featured an array of top Kenyan filmmakers and content creators including Sarah Hassan, David Campbell, Wilfred Kiumi, Toni Kamau, Abel Mutua, Dennis Mbuthia, Ledama Sempele, among others. These filmmakers were joined by notable professionals from the corporate world, including key broadcasters in Kenya.

The Market also addressed industry concerns comprising Co-productions; Broadcasters role in meeting the quota requirement for local productions; The Production Value Chain; Money in Content Creation; Financial Models within the Film Industry; Legal Framework within the Industry and Tax in the Creative Industry, among others.

Overall, the conferences and workshops in this edition were viewed by over 5000 people from various parts of the world.

The highly anticipated Pitching Competition was preceded by a call to filmmakers to submit concepts in areas of Film, TV Shows, Documentary and Animation Projects. From the 214 submissions received, 24 were shortlisted i.e. 6 concepts for every category. The 24 filmmakers whose concepts were shortlisted were invited to pitch to a live Jury and the recording was uploaded on the KFC Youtube Channel. 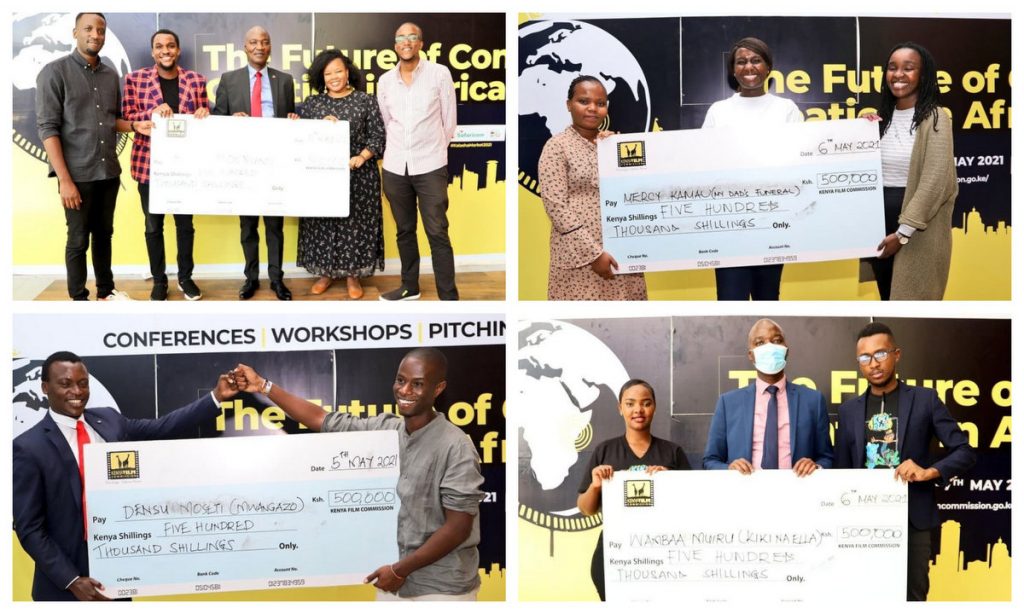 Kenya Film Commission is proud to have partnered with Safaricom PLC and Daystar University for this edition. The conferences, workshops and pitching competition were streamed live on the KFC Youtube channel: https://www.youtube.com/user/kenyafimcommission/videos and are still available on the platform.